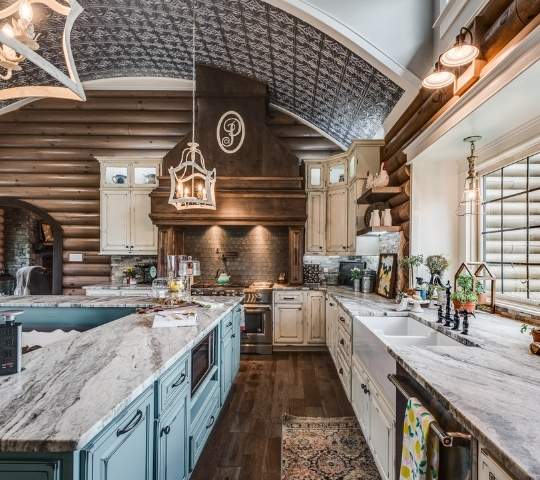 “Modern farmhouse at its best.” At the grand opening of the new 10” Round log home of Nick and April Patterson, those words were among the many used to describe this dream kitchen. From top to bottom this kitchen is unique, with different colors and textures, but in the end the log is still the star of the show.

Originally, the plans for the kitchen ceiling did not include the barrel seen in the photo above, but like everything else in this home the owners, Nick and April Patterson, wanted to make a statement in the kitchen as well. We are confident the ceiling did just that. We chose to finish it out with a silver decorative ceiling tile and painted trim. The trim for the kitchen – and the whole house for that matter – is different in that we notched or beveled each log around the trim for a finished look and decided to have both stained and painted trim.

We used Perma-Chink for stain and Sherwin Williams for paints. Looking for a high contrast color to be able to use throughout the entire house was a bit of a challenge, but in the end we decided to have the trim that was to be stained Perma-Chink Black Walnut, and the logs themselves in the kitchen were stained Perma-Chink Gentry Grey.

Nick and April didn’t know what they all they were about to get into while building this home, but they did know a few specifics they wanted in the end. Two of them were cabinet color and chicken wire used within the cabinet design.

To top the cabinets off, we used something that is relatively new to the market, a leathered finished granite. We chose the color Fancy Brown. Unlike most granite that is somewhat spotty looking, the Fancy Brown offered a marble look with nice flowing lines that gave a new feel, which is what we had wanted.

As a designer, I believe nothing can make a home come together more than lighting. The placement of lights is absolutely required to highlight your designs. When choosing the lights for the kitchen, I needed something that would put out a great deal of light and reflect off the ceiling but also something that would add to the design. We installed recessed lighting in the ceiling to provide ample illumination. To anchor the island, we decided to hang chandelier type lights at each corner. Much like the Fancy Brown granite tops, the hanging lights were a bit fancy too.

To bring it all together, we chose a flooring that would be suitable throughout the home but at the same time be able to compliment each aspect of the room which it was laid. We went with an engineered hardwood from Somerset Hardwoods. It is a hickory wood and finished in a winter wheat stain.

Each aspect of the design was carefully chosen to compliment each other and the home as a whole. Flow between each room was a must. Honest Abe Log Homes created a beautiful new log style with the 10″ round, and it absolutely shines in this kitchen and throughout the entire home.

For more photos of this kitchen and other rooms in the homecli, ck here.